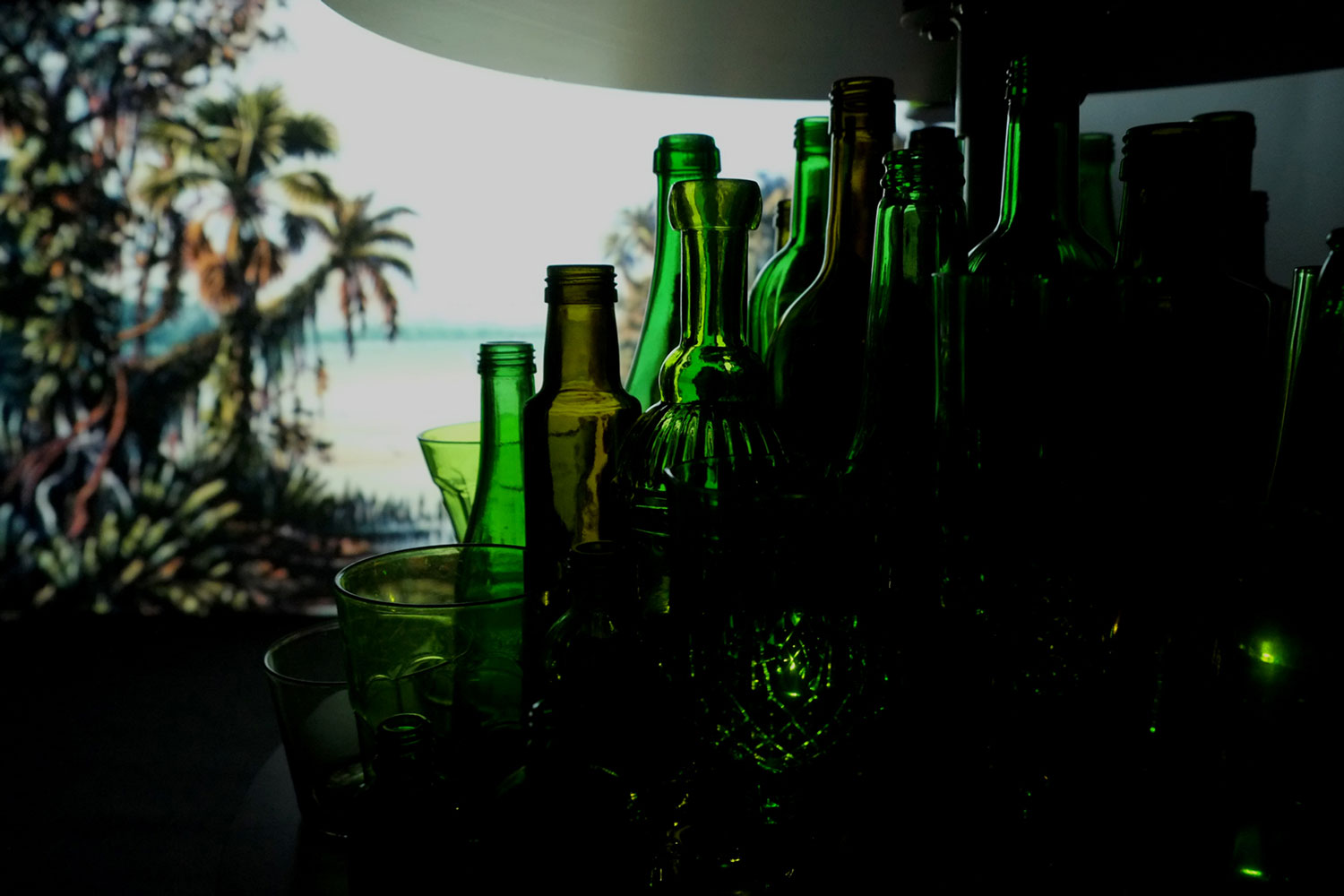 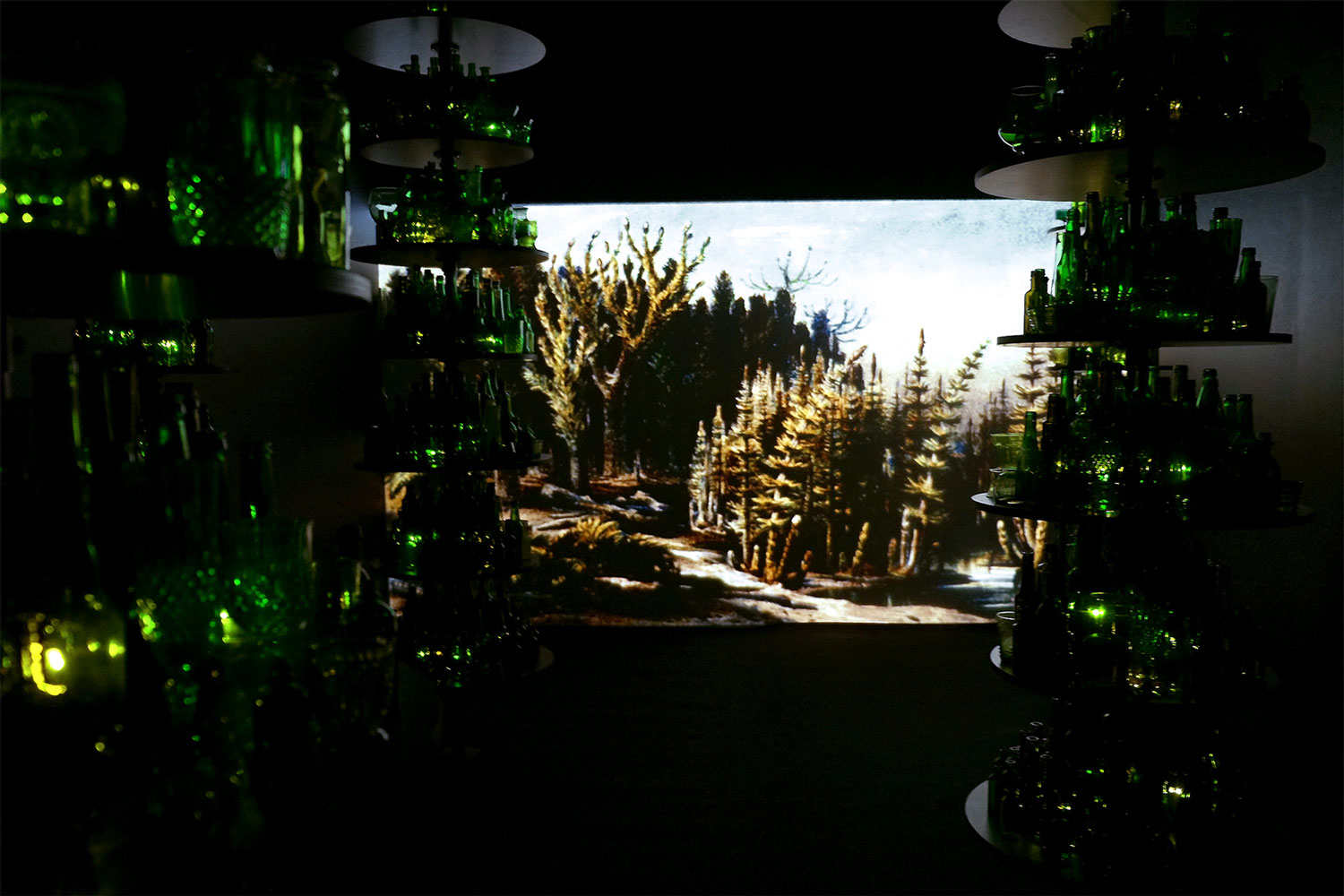 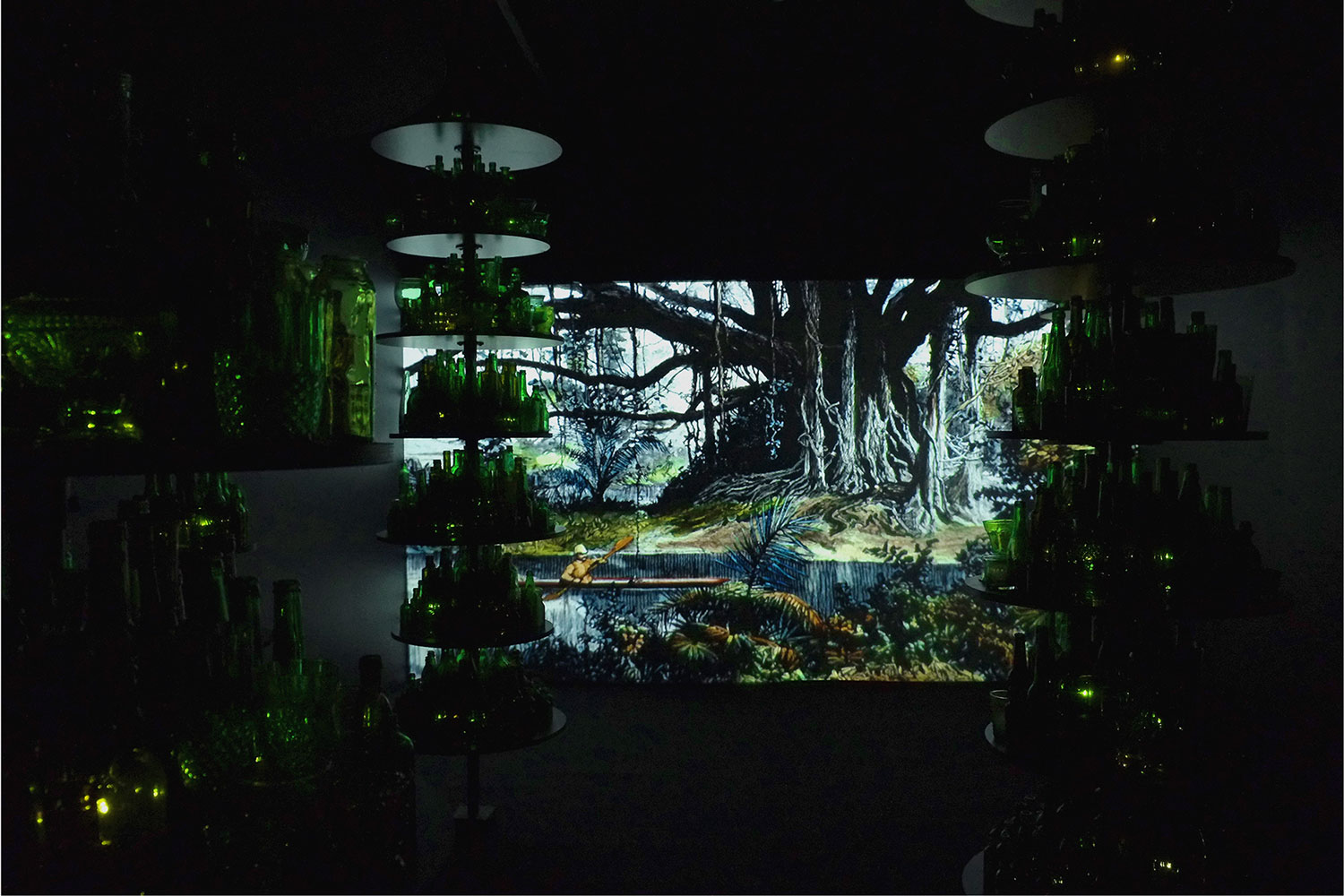 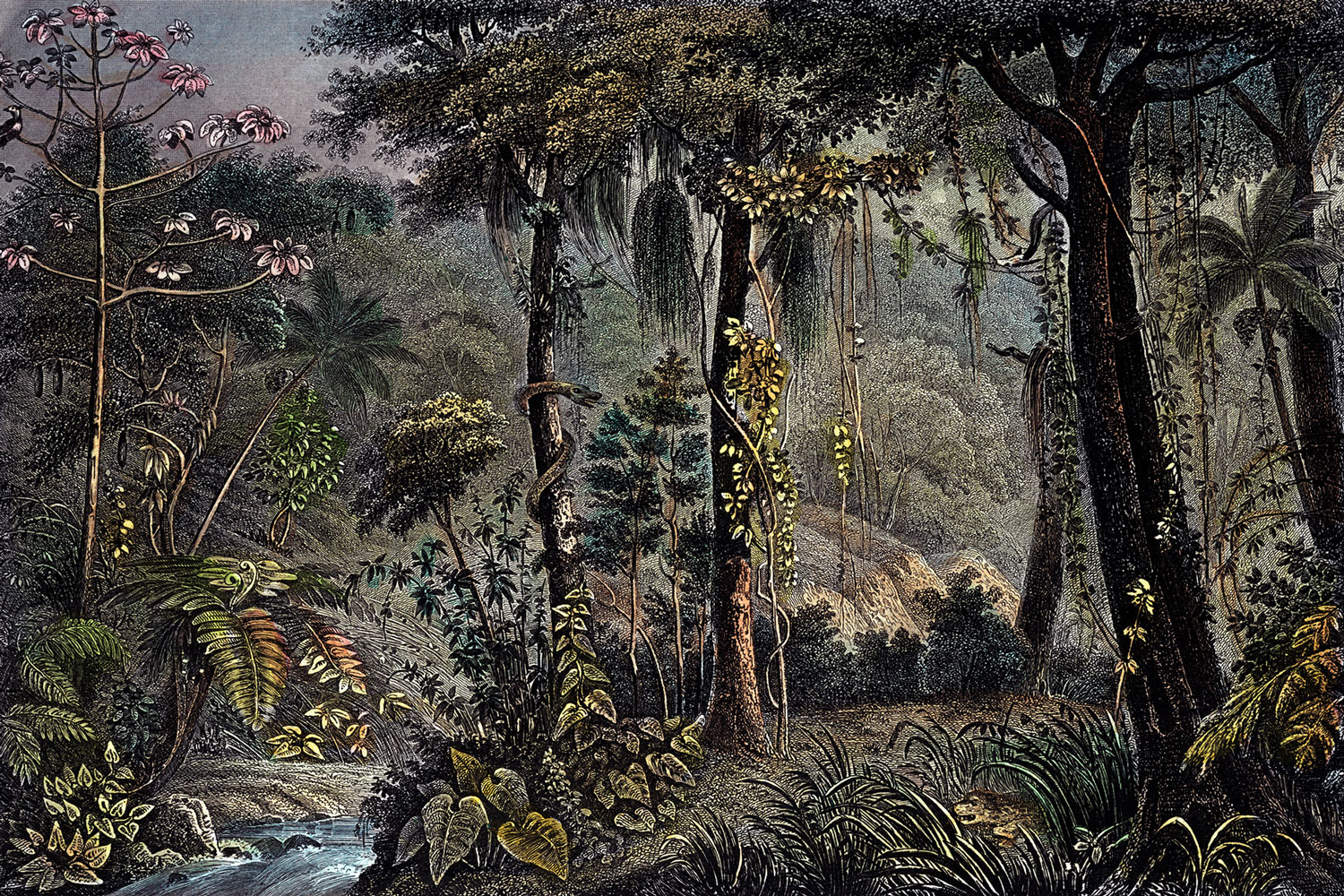 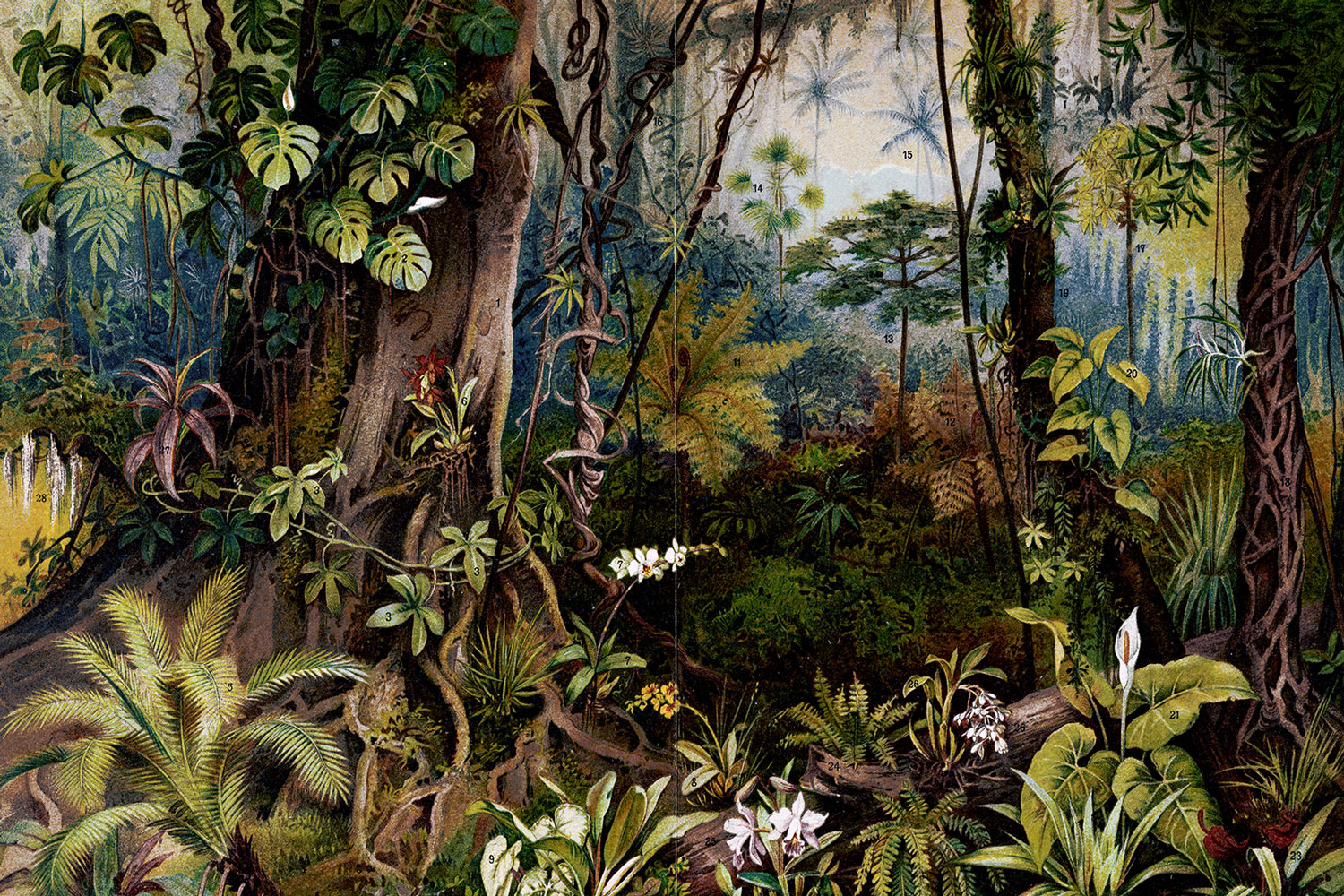 This is a story about the tropical forest. It is a story of the men and women who ventured from colder climates to explore, conquer and exploit the abundant resources found in these fertile new lands. It tells of how they grew to love, and hate, this place, and how their narratives, illustrations and perspectives founded the contrary views we have of the tropics today – warm and abundant, but ridden with disease and decay; fertile and lush, yet overpowering and out of control; full of exotic species that are beautiful but deadly, and natives who are friendly and sensual, yet lazy and morally lax. These assumptions also extend to the expectations surrounding the idea of a tropical aesthetic with its ubiquitous palm-trees, luxuriant forests and exotic wildlife.

Yet this is also a story told from the other side – by the locals living within the tropics. It is an account of their dissatisfaction with these assumptions and their struggle to question and defy the tropical stereotype. Eventually, some bow to the seemingly inevitable, in time even transforming their physical landscape and population to better fit the clichés. Others choose to challenge these definitions, actively making decisions to transcend the labels placed upon them.

The narrative ends with a tropical island’s quest to define and construct its own national identity. A former British colony, Singapore is a fascinating case study: with her shrewd use of tropical conventions, she has built a public image that, while leveraging upon the positive aspects of the tropical stereotype, deliberately minimises or refutes the negative. Since her independence in 1965, this small city has experienced rapid growth and her landscape has changed dramatically. Instead of the crowded slums and tropical plantations of yesteryear, the island is now home to sleek highways, soaring skyscrapers, and meticulously planned housing developments. Here, urban planning and renewal is almost a national obsession; every detail carefully considered and developed. For instance, the frequent and prominent use of tropical plants around the city stems from a request made in 1988 by then Prime Minister, Lee Kuan Yew, for the planting of “palm trees to distinguish us from other places… These palms will make it known that this is the Tropics, the equator, the exotic East.” The request resulted in the planting of hundreds of palm trees along the highway leading to and from the airport as well as the preferential use of tropical plants in the island’s constructed landscapes.

Yet despite catering to colonial assumptions in its choice of plant species, Singapore’s greening policy defies the standard readings that depict the tropics as being somehow “untouched” and “unspoilt”. Shrubs and trees are arranged in strict geometry and require constant effort to maintain. The newest public project, Gardens by the Bay, is a good case in point. Plants are nurtured within a highly regulated greenhouse environment, nestled within structures that are themselves powerful feats of engineering. The prodigious coordination, skill and exertion required to maintain the Gardens by the Bay project – in fact, Singapore’s entire greening project – are evidence of Singapore’s endeavour to conquer unruly nature and present an identity that both refutes and rises above conventional colonial expectations.

Letters From the Forest